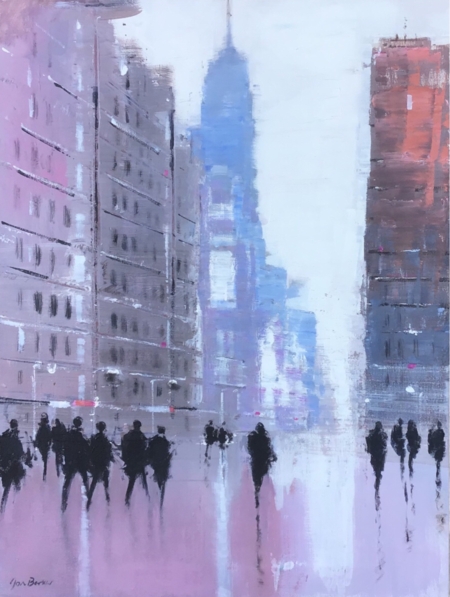 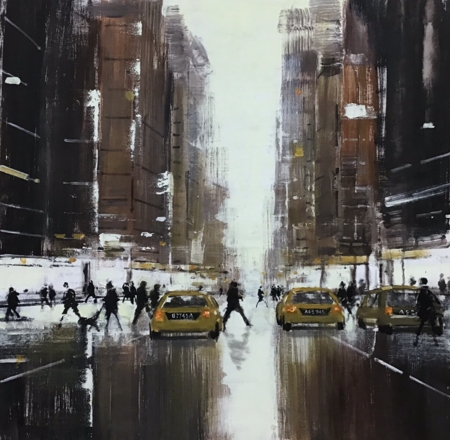 Jon Barker was born in Yorkshire in 1950'. He obtained a BA in Business studies at University in Edinburgh and pursued a career in marketing management.

Over a 20 year period from his mid 20's to his mid 40's he trained himself to paint to a professional standard.  At that point he left marketing and started to sell his work.

Initially he concentrated on his love for landscape but in recent years he is increasingly associated with his successful " City Life" series which is now published internationally.  His original paintings are held in private collections throughout the world.

His "City Life" paintings aim to capture the moods of major cities of the world. Iconic land marks such as Big Ben, The Eiffel Tower and The Empire States Building typically feature in his compositions.  Visitors to bistros and restaurants traversing warmly night lit streets of London's West End or Saint Germain in Paris are contrasted with commuters struggling through snow on Westminster Bridge or 5th Avenue, New York.

These are well known  locations but Jon's intention is to transpose us from the urban realities of the real world to a more idealised world in which romance and a sense of security prevail.  Jon likes to feel that Carry Grant or Audrey Hepburn would be at home there.

Compositional integrity and tonal balance are priorities.   Jon will frequently draw, erase and redraw his figures many times until they are in just the right place.

" My work is  carefully planned but once the basic composition is in place I try to switch gear to a more painterly and rapidly expressive approach..  I believe that it is important to take risks when producing art.  I do lose some work when I experiment but equally something new and special may happen when working in this way.

Currently I am exploring the use of a very limited, largely black and white palette.  I am very drawn to archival black and white photography which has become a source of inspiration for some of my recent work."

"The landscapes which I produce are now an occasional diversion and release from the disciple which the "City Life" work requires.   They are usually very spontaneous and are drawn from my deep love for the English countryside and increasingly the outstanding beauty of Mediterranean Turkey.