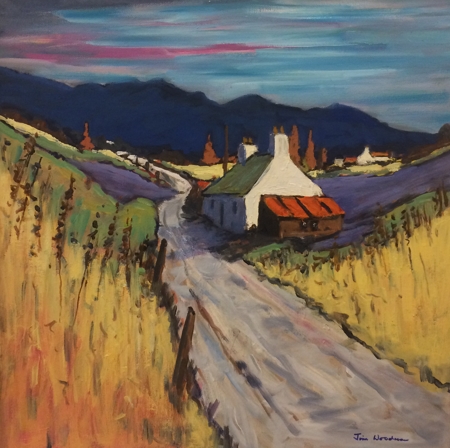 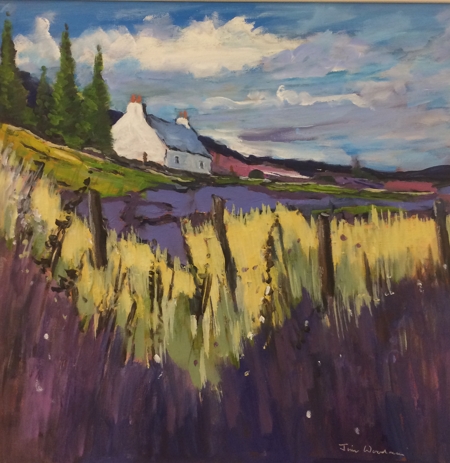 Jim Woodman is a full-time painter whose work is noted for its use of strong, vibrant colours that imbue stark landscapes with warmth and intensity. His inspiration is the landscape, which he paints in oils, watercolours and acrylics. Much of his work celebrates the stark, moody beauty of the island of Skye. In contrast, he also paints the Thames and its environs in London, as well as Tuscany, France and Spain. He is a Member of the National Society of Painters, Sculptors and Printmakers and won the Aya Broughton Prize at the Society’s exhibition in November 2006.

“The inspiration for my work is the landscape. My paintings attempt to convey my response to the colours, mood and forms found in such diverse places as the Northwest Scotland and the Mediterranean. I do not seek to portray the landscape as we see it with the naked eye, but to capture the intense emotions I experience in certain places, a windswept Scottish hillside with its deep purples and rusts, or a Tuscan town with its scorched hues of terracotta and bleached brick. Places move me”.

Jim exhibits widely in the southeast through galleries and at Art Fairs including the Affordable Art Fair, Battersea, at exhibitions of the National Society of Painters, Sculptors and Printmakers and in several other venues in and around London. His work has been selected for both the Royal Institute of Painters in Watercolour Annual Exhibition at The Mall Galleries and the Royal Watercolour Society open exhibition at the Bankside Gallery; it is also exhibited in a number of Scottish galleries. In 2006 he took part in a group exhibition “Scotland in Colour” at the Morningside Gallery, Edinburgh, and Stirling Art, Stirling as well as the Christmas Exhibitions at the Morningside Gallery and Torrance Gallery, Edinburgh, December 2006 to January 2007.